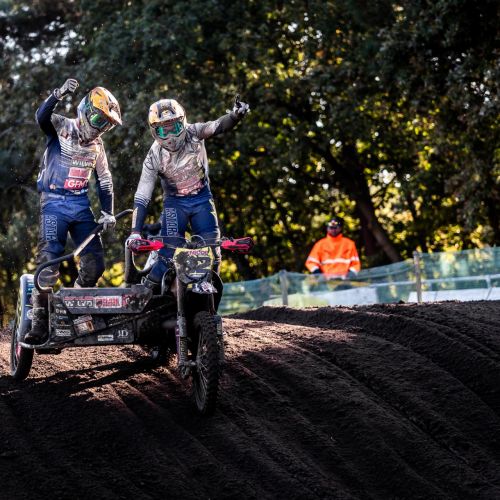 Oss Motorclub has been running races on this track since 1980, although the first event took place seven years ago on an earlier circuit close by. The track conditions in the Netherlands and Belgium are unique. Nowhere is the sand so deceptively soft and deep. Those teams who grew up on these soft tracks are likely to be unbeatable, except when five of the top six in the standings come from this part of the world. That situation is bound to level the playing field, as no one crew would appear to have a local advantage on paper. Odd men out in this regard were Estonian Kert Varik with Finnish passenger Lari Kunnas.

Having said that, Varik has demonstrated his skill in all types of going, so we were set for an amazing weekend. Those people unlucky enough not to be at the event in person had the option of watching the entire weekend action on the live stream beamed around the globe.

Qualifying – The usual group split put Jake Brown and Joe Millard in group “A” with some big names. It appears their bad luck has turned around because the British crew recorded a fantastic time to place second fastest behind defending champion Etienne Bax.

Julian Veldman/Ondrej Cermak finished third ahead of Koen Hermans/Glenn Janssens. The track did not cut up too much in the early stages, as this reclaimed garbage site is prone to do. So, from group “A”, the main players were in a strong gate position for the opening race. Group “B” saw Marvin Vanluchene/Robbie Bax shoot into a fast lap on lap three, opening a five second margin over Justin Keuben/Dion Rietman with four minutes remaining. Kert Varik, Tim Leferink, and a returning Gert van Werven/Ben Van Den Bogaart. Davy Sanders this weekend with Rodolphe Lebreton came next, looking good. Daniel Willemsen had decided to sit this weekend out, so the young Frenchman stepped onto Sanders’ platform. Vanluchene was really flying and sent a very strong signal to the opposition in the championship chase that he and Robbie Bax mean business this weekend..

Race One – The gate dropped, and this riveting series finale was underway. Marvin Vanluchene/Robbie Bax were determined to get a strong result and they had a flying start. With three crews so close in the title chase, every single point and position would count. Etienne Bax/Nicolas Musset had a good start too, as did Koen Hermans/Glenn Janssens.

Both crews tucked in behind the 2018 champion with Bax easing away from Hermans. Veldman/Cermak not so lucky in the deep sand. They were further down the order in seventh with work to do. Varik/Kunnas were strong in the early laps and looked set for a good fourth place, but it was not to be. Bax/Musset followed and stalked Vanluchene and passed him through one of the deep sections. Once in front, the reigning champion shook the sand out of his hair and consolidated his lead. He and Musset were flawless to the flag and lifted maximum points with victory.

Hermans/Janssens slowed with a rock in the rear brake mechanism but held on for third.

Gert van Werven/Ben Van Den Bogaart were going well in fifth, but Gert was hampered by his recovering collarbone and succumbed to Justin Keuben and an advancing Julian Veldman/Ondrej Cermak. They eventually retired with fifteen minutes remaining to the flag. The red plate holders Veldman/Cermak kept pressing and moved fourth when Kert Varik went out with seven minutes plus two laps remaining. A brilliant ride by Jake Brown/Joe Millard rewarded them with seventh ahead of young superstar Tim Leferink and just behind Marco Heinzer.

Bax/Musset’s win closed the title chase to three points with them tying with Vanluchene. A grandstand finish is on the cards for the two races tomorrow.