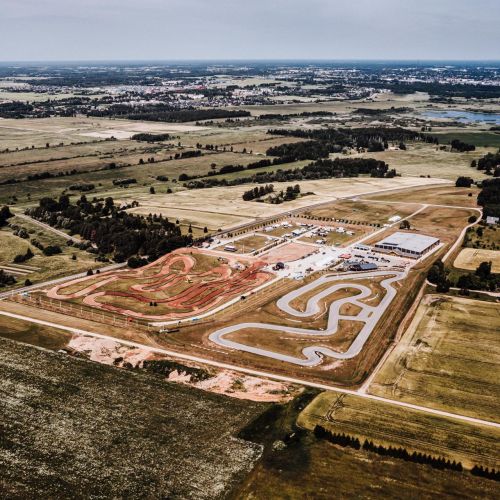 It is hot, it is splendid, it is like no other Motorsport complex we ever visit on the road with WSC and the Sidecar GP’s. Estonia has much to shout about, with the Lange Motokeskus facility ranking highly on its list and among the best.

It’s a long way by road, but those teams who have made the journey here from Lommel will not be disappointed. The track has been well prepared, and watering is going on as I write. Advertising banners are up, camera positions

chosen and teams are rolling in. Marvin Vanluchene’s passenger and family are having trouble with flight delays, with Robbie Bax not yet on-site and no arrival scheduled yet. This is just one more irritation for a team who have not had the best of luck this season yet emerged overall winners in Lommel.

We’ve been out and about in the paddock doing interviews for the highlights show. I’ve been talking to series leader Etienne Bax contemplating his four-point lead, young pretender Justin Keuben, this week using Kostas Beleckas alongside, fourth placed Gert van Werven, and last week’s overall winner Marvin Vanluchene. He like others, is waiting for the other half of his team to arrive by air. Meanwhile, the paddock continues to fill.

As the build-up increases here in Lange, Estonia, all the hype and publicity, all the shouting and acclamation, all the buzz and excitement this season is naturally about the big names. Those names need no introduction, but take Bax, Varik, Veldman, Vanluchene, Van Werven, Wilkinson, Hermans, and others.

Beneath this level of Sidecar Cross royalty, there is a subculture emerging of young ambitious crews, all of whom grew up with an ideal and an objective.

That is to be great competitors just like the teams who inspired them some way back down the line. If we look at the current state of the standings, they reflect some good luck, and some bad luck, as well as moments of brilliance.

There is no trend, no pattern other than having seen these young teams battle, largely under the radar of publicity and press coverage and supported only by family and friends, I feel a great sense of optimism for the future of the sport.

In most cases the interest is genetic, and older family members are often in their corner, but not always. It would be wrong of me to single out individuals, but the talent is apparent in several young teams, and I think they deserve a shout.

One or two have had outstanding rides in the past, and are maturing further this season, but allow me to throw a few names at you, and that is with no detriment to others who have not caught my attention this time around.

Jake Brown, this year with Paul Horton, has already shown what he can do running top three in races, but injury has held him back so far. Trust me, that will change. Tim Leferink with Kostas Beleckas alongside is sensational at eighteen years of age and has a lot more to give. Dan Foden and Nathan Cooper have racked up top ten results in unfamiliar terrain, whilst Mike Hodges and Jack Wilkinson did themselves proud in Lommel. Both these latter teams are well and truly on the way up.

Then from France, we have “Les Freres Prunier” who astounded the establishment with fourth overall in Loket. They were unable to repeat this feat in Lommel, but sand experience will come.

These are just five teams who caught my eye last time out and not all of them will make the trip to Estonia. I make no apology for singling out a handful, but there will almost certainly be fantastic achievements to record by others, and I will do my best to spot them.