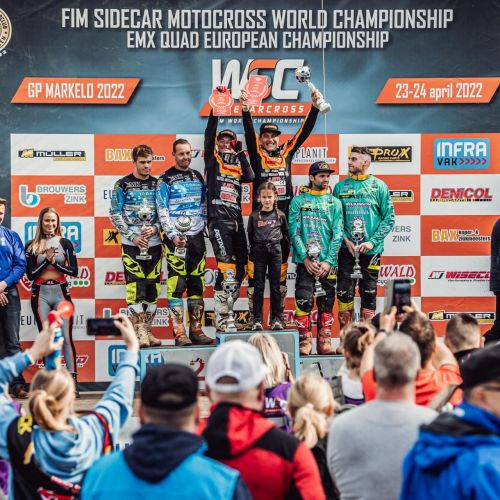 After a six-month wait, the FIM World Sidecarcross Championship burst back into life, and what better way to kickstart the season by having a full grid of eager challengers, looking to make a mark on the 2022 season.

From the off, it was the holeshot for Bax-Cermak who had opted for the left-hand side of the gate, while Vanluchene-Bax and Varik-Kunnas were making contact in their attempts to put themselves in second place. As ever, the start was not without its drama as vd Lagemaat/de Veene, Brown/Chamberlain and Heinzer/Betschart were tangled up with each other, however we would soon see them fight their way through the field.

Bax-Cermak put the hammer down from very beginning to try and break the field up, however Vanluchene-Bax, van Werven-vd Bogaart and Varik-Kunnas had other ideas. Veldman-Janssens had managed to overcome the defence of Vanluchene-Bax as they seemed to be experiencing some level of mechanical issues which resulted in them going from second to fifth in the space of one lap.

The dicing duo of van Wervan-vd Bogaart and Varik-Kunnas was an exhilarating one, they were riding so closely that they could have been passengering each other! Throughout the latter stages of the race, Varik-Kunnas had significantly gapped van Werven-vd Bogaart, and were chasing down Veldman-Janssens, who had hit the cruise control with a seven second advantage over the Estonian and Finnish crew. Once Veldman-Janssens had realised that their second place wasn’t quite as secure as they first thought, they lowered their lap times into the region of 2:12, and this was enough to put distance between themselves and the chasing Varik-Kunnas.

Further down the order, Wijers/vd Putten were having a cracking ride in seventh place, and it’s safe to say that they will be thrilled with this result. It’s also worth mentioning that after over two years away from the GP paddock due to injury, Wilkinson-Millard were in flying form as they claimed sixth place in Brett’s comeback race. The remainder of the top ten finishers were completed by the British crews of Brown-Horton, Foden-Cooper and Brown-Chamberlain, who used all of their experience to round out the top ten after being last after the first turn.

The final race of the weekend got underway in very dramatic circumstances as Bax-Cermak took the holeshot, there was carnage behind them as Vanluchene-Bax, van Werven-vd Bogaart and Veldman-Janssens were all caught up together on the apex of the first turn. This let Bax-Cermak take the lead ahead of Keuben-Lebreton with Sanders-Rostingt slotting into third.

A freight train of sidecars made their way around the Markelo circuit, and Sanders-Rostingt soon dropped down into fifth after overtakes were made from Varik-Kunnas and Wilkinson-Millard, all of which managed to avoid the drama at the first turn.

Further down the order, van Werven-vd Bogaart, Veldman-Janssens and Vanluchene-Bax were charging hard, however in the case of Vanluchene, perhaps too hard as he fell again and was collected by Heinzer-Betschart while being positioned just outside of the top 10. As a result, Vanluchene-Bax had an unscheduled visit to the pits, to check over both the bikes and themselves.

Brown-Horton were battling hard in sixth place after overcoming a very fast Wijers-vd Putten who were having another strong race to reinforce their earlier performance. On the next lap, Brown-Horton were relegated to eighth as a determined van Werven-vd Bogaart were slicing their way through the pack after their troubles on the opening lap, likewise Veldman-Janssens who were knocking on the door of the top 10 when the race was brought to a premature end.

With around ten minutes remaining, the red flags were thrown out for an incident involving van Werven-vd Bogaart which was a great shame as they were on course for a fantastic result, especially taking into consideration that they were at the back of the pack on the opening lap.